A Foodie City Gets It!

The largest central farmers market in Lisbon, Mercado da Ribeira has been the city's main market since it opened in 1892 with a grand oriental dome.

Inside is a massive pavilion where you can watch fresh seafood from the Azores Islands to Norway being snatched up by locals and restauranteurs haggling for the best price. Although the financial crisis and wholesale, discount chain stores had reduced this once thriving market to a handful of diehard vendors, in 2014 it's management was taken over by TimeOut Lisboa magazine, with a bold a project that was finally realized last week and opened to the public with much anticipation.

The Mercado da Ribeira now hosts a lively food pavilion with over 30 top chefs, Lisbon eateries and famous shops, some of which have supplied Lisboetas with savory foodstuffs for over a century. Inside is a beautifully designed 500 seat dining area that gets bustling around 9:00pm, but not to worry because there are another 200 seats outside on the terrace where seafood and light snacks alike can be enjoyed beside the park in Dom Luis Square.

There are no fast food stands, no trans-Euro franchises, and none of those awful umbrellas and plastic chairs sporting logos for sodas and beers. This shows how Lisbon takes its food seriously and the plans for more are in the works. There will also be a space dedicated to cultural activities on the first floor that will open in September 2014. There will be an auditorium capable of seating 300 people as well as a bar and restaurant. TimeOut is already organizing small cultural events with artists and musicians to liven up the summer and fall nights in 2014.

Come check out everything from traditional Portuguese sandwiches like the Prego, or Bifana, or fresh Atlantic seafood and fish dishes, an excellent selection of local wines, cheeses and even some ethnic eateries from former Portuguese colonies where the kitchens or Portugal and other countries have combined over time to create their own unique cuisine. There are renowned chefs sporting stars, and start ups who won a competition hosted by TimeOut to receive a coveted place in the market food pavilion.

The Mercado da Ribeira food pavilion is open from 10AM to midnight On Thursdays, Fridays and Saturdays it is open  until 2:00am in the morning. Located on the ground floor on the west side of the pavilion. The address is Rua da Ribeira Nova, 18. 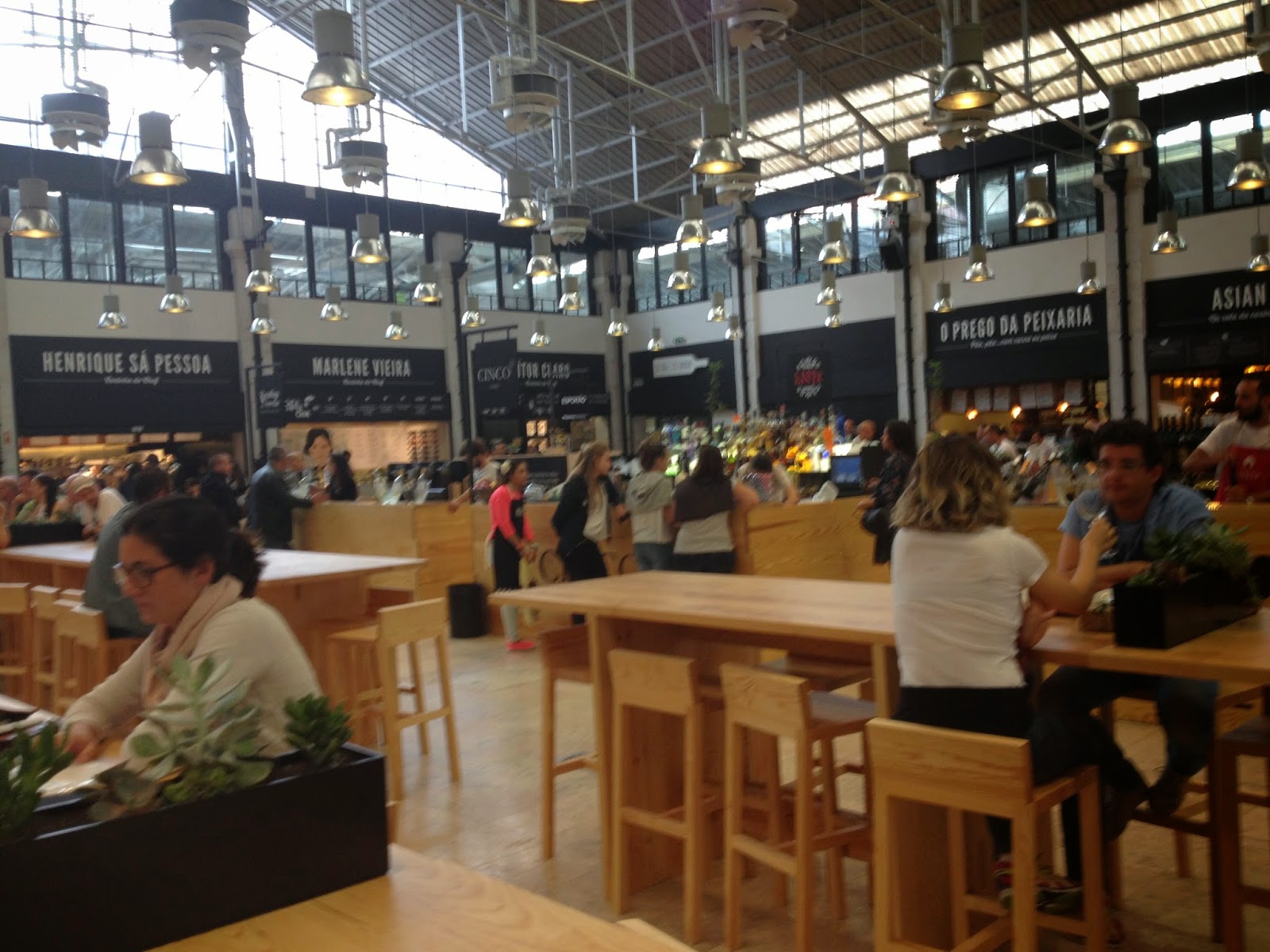 Posted by Lisbon Explorer Blog at 4:33 AM No comments:

The Abandoned and The Condemned

On December 5 in 1872 the Mary Celeste, a Canadian-built, American-owned merchant ship was speeding across the Atlantic from the Azores Islands towards Gibraltar with sails at full mast.

However, when it was sighted 1,000 km from the coast of Portugal by the crew of the Dei Gratia, a Canadian brigantine, they discovered the Mary Celeste was abandoned, completely unmanned of any crew mates. Although the weather was fine and there was no damage to the ship, nor any distress flags, when Oliver Deveau, Chief Mate of the Dei Gratia, boarded the Mary Celeste. On board he discovered something even more bizarre. All of the ship's papers were missing, except for the captain's logbook. The ship's clock was not functioning, and the compass was destroyed; the sextant and marine chronometer were missing. A six-month supply of uncontaminated food and fresh water was still aboard, and the crew's personal possessions and artifacts were left untouched, making a piracy raid seem extremely unlikely. It appeared the vessel had been abandoned in a hurry. There was no sign of a struggle, or of any sort of violence.

I find this one of the more mysterious and intriguing stories related to Portugal's maritime history, and the unusual circumstances have given rise to all kinds of explanations for the ships abandonment, ranging from alien abduction to mutiny, and a variety of hoaxes. Even Conan Doyle presented a theory on what had happened in a poplar magazine article.

Today, the coast and interior of Portugal offer similar sights that intrigue me like the story of the Mary Celeste. The vast number of abandoned estates, homes and buildings throughout Portugal offers a starting point for exploration into our past and present, where many mysteries unfold in the emptiness of these decaying spaces.

In the capital of Lisbon alone there are over 6000 condemned properties, according to the ​Superintendent of the city. Buildings in populated areas of Porto, Algarve and even in remote areas are being condemned faster than they are restored, which represents a growing trend across Europe as the financial crisis compounds the problem of maintaining our heritage. Vast numbers of citizens are moving to the city-suburbs for work, or immigrating to other countries for greater opportunities and new beginnings.

The politics and economics behind this growing trend are complex, and with over 11 million abandoned, or vacant homes in Europe right now there are more than double the number of homes for every homeless person in Europe. Why are prices not dropping in a stagnant economic crisis where a supply of abandoned homes on the market far exceeds the demand? This question leads to as many explanations as there are for the mysterious abandonment of the Mary Celeste.

Below are some of my favorite places abandoned or condemned around Portugal today. In their sad state of decay, I hope for their rehabilitation before it is too late to save them, and at the same time I enjoy the beauty they possess, expressing our impermanence and struggle to remain present. 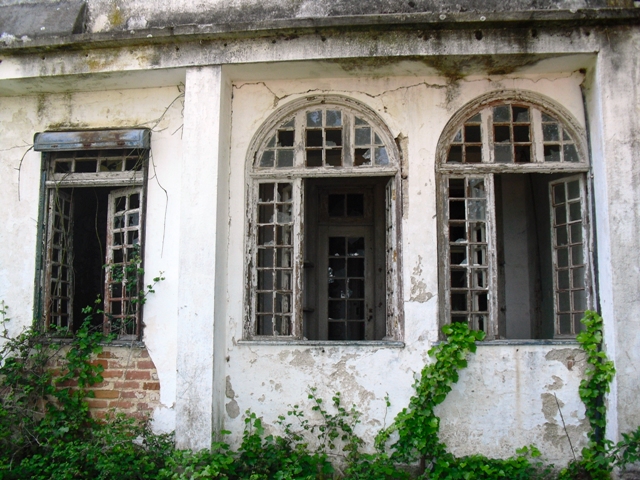 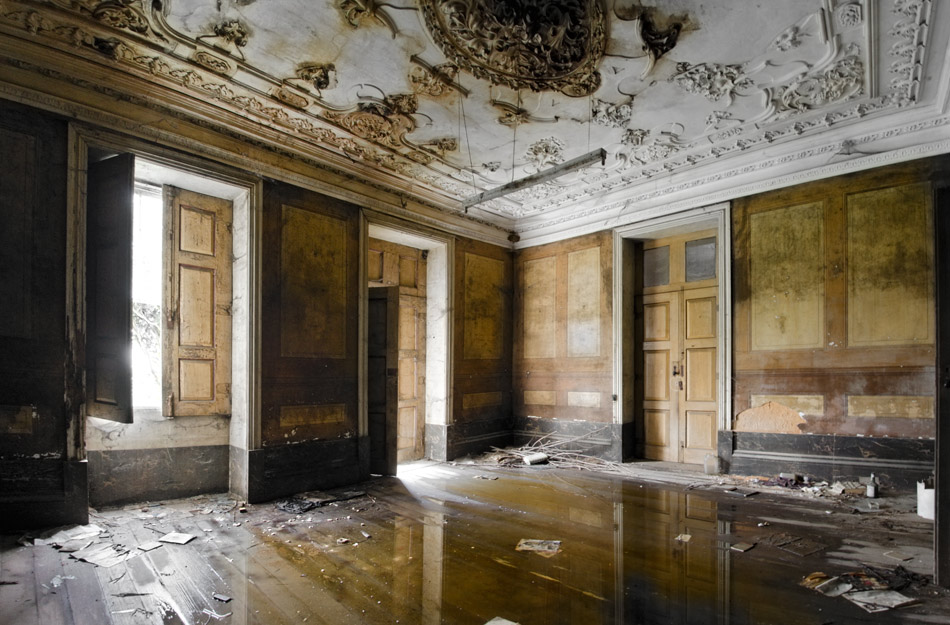 Casa do Professor ou Quinta do Parreira, (The teacher's house or Estate of Grape leaves). A beautiful House, which had several owners over the years. The names by which it is known due to two of its owners. Its first owner was a man named Doc Ab, was a well-known in the region and a wealthy landowner who provided aid to the most needy peasants of the countryside, even providing them employment on other properties that he owned.

Posted by Lisbon Explorer Blog at 6:37 AM No comments:

The Other Side of Fado

Most well-heeled travelers headed to Lisbon will have heard about our brand of local folk music called Fado, meaning "Fate".

Formally recognized in the 19th century, and UNESCO protected as “Intangible Heritage” today, the music is filled with melancholy, deep emotional longing and evoking the multicultural influences that have formed contemporary Portuguese culture over the centuries. It's roots are in the islands of west Africa, carrying melodies influenced by Arabo-Hispanic troubadours with a residue of Ladio influences from Sephardic communities.

In recent decades scores of music lovers have been seduced by Fadistas like Amália Rodrigues, known as the "Rainha do Fado" (Queen of Fado), who cemented its position in the international World Music circuits until her passing in 1999. Today, performers like Mariza are packing theaters around the world to be seduced by her re-invented Fado, or Cristina Branco, and Ana Moura representing a new generation of talented Fado interpreters.

Catching a Fado show in Lisbon is an essential cultural excursion that everyone should make at least once. However, much like a Flamenco show in Spain, there are more than a fair share of tourist traps to avoid with over-priced, mediocre dinners and equally inferior musicians. Knowing exactly where to catch a really good Fado concert is a matter of knowing who is playing where, and what places can serve up a decent traditional Portuguese dinner at a reasonable price. This is best accomplished by asking a local who is enthusiastic about Fado, directing you to a place that hotel concierges, or a guide books won’t usually mention.

If getting high on feeling low with depressing folk music is not your thing, or if you just want to steep yourself deeper into modern Portuguese culture, than the culturally curios will be happily rewarded discovering some of our more contemporary musicians, from rock to indie-style alternative and Jazz, there is a lot for music lovers. And, true to Portuguese form, the promotion of these bands, like our wine, beaches and cuisine rarely receive the attention they deserve outside of Portugal, but for those who are brave enough to make the leap, the music of Portugal will more than satisfy.

Emblematic of this is Deolinda a quartet band founded in 2006 when brothers Pedro da Silva Martins and Luis José Martins (formerly of the band 7-Headed Beast) invited their cousin, Ana Bacalhau, to sing with them. Ana’s vocal styling brings all the syrup and tenor of a traditional Portuguese Fadista, but she and the band will surprise you with upbeat and catchy melodies, full of irony and humor without the black dress-formality of Fado. Their 2013 hit "Seja Agora" is a good example.

The Poppers in their song Drynamill will take you back to recent decades when record companies were run by music lovers, not lawyers and accountants who pursued pretty boy bands and female artists with names like Britney and Katie who count on revenue from 14 year old girls. If you want something like that, check out a young woman with some pop integrity, named Susana Félix and her track "Já foi”.


The Poppers in their song Drynamill

Madredeus is more of a  musical ensemble, making music that combines traditional Portuguese elements. They came on to the wold music scene in the late 1980’s and through breakups and reformations the band still makes meaningful harmonic and rhythmic tunes that will haunt you.

For those who like their folk music a little more grungy and understated, Dead Combo is a dou dressed as a caretaker and a gangster who mix fado with spaghetti western-inspired music that you might imagine in a Quentin Tarantino film. You just have to listen to appreciate, because words can’t do justice.

The next time you are surfing iTunes, or in Lisbon, give them a listen and take your time talking to locals about where they go for Fado.
Posted by Lisbon Explorer Blog at 6:55 PM